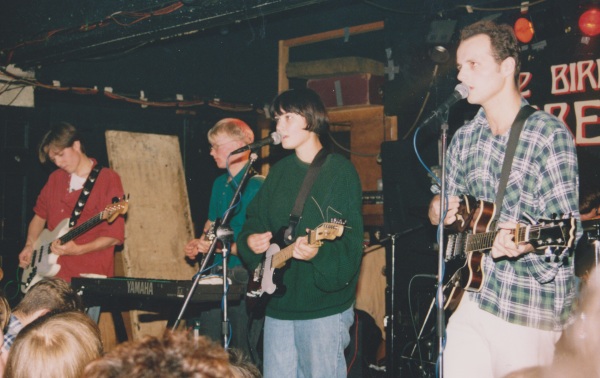 Basically they started around Croydon (near London) in around 87/88 and signed to Sarah soon after.Their first EP was 'Emma's House` (4 songs, forlorn, gorgeous) and then came their biggest 'hit` 'Sensitive` which is among many people's favourite songs ever (guitar/bass driven, angrily arguing for our right to be sensitive - "if the sun going down can make me cry, why should I not like the way I am") - I thought the b-side was better though.

'Snowball` was next, one of Sarah's dead cool 10inch mini-lps (good, and containing 'Kiss and make up` subsequently covered by St.Etienne - the Field Mice version was MUCH better). Next came 'The Autumn Store`. This was a 2single set which, though I may be alone, I thought was pretty dull. Sometime around 1990 came the 'Skywriting` 12 inch mini-lp which is very electronic but supercool for the non-Luddites amongst us (this release was HATED by many dedicated Sarah fans). After that was, hmm, I'm doing this from memory so I may have forgotten some things..., possibly Sarah's greatest record - 'Sosaid Kay`. This was the first non 7inch single released by Sarah (it was 10inch) so I hated it at first on principle. After listening though I was awestruck...all the 5 songs on the record were fantastic. 'Holland Street` is high in my Top 20 but the other are good enough to make it too. 'So said Kay` itself is wonderful - taking dialogue from the film 'Desert Hearts` and weaving it into a wondrous, almost orchestral epic.

Afterwards the FM began (in my opinion) a bit of a decline. 'September's not so far away`, the next single, is a great popsong but really is a step back from 'So said Kay`. The compilation 'Coastal` came out around the same time and is indeed a MUST BUY - but there's so much more. Hmm, what's left, well a 12inch called 'Missing the moon` which is brilliant - dead poppy and Sarah's attempt to get into the real charts (I think they got to about No.98 - which is pretty good).

The final LP 'For Keeps` was, well, okay. It had 'Willow` which was (is) wonderful. But it disappointed me a little.That's pretty much it. I think I still agree with much of this.They were tremendously underrated - mainly because of their singularly ill-chosen name - it never really gave them a chance with the hipnessatallcosts British music press.

They split up in the end to become Northern Picture Library (with basically the same people). I still like them a lot.