TweeNet Bands | Labels | Lists | More | Search
about your host
My private web site is at peter.hahndorf.eu


1986-1988 - The early years
1989-1993 - Fanzines, mail-order and label
My step from a passive listener to a active person in the World of indiepop took place back in October 1988 when I first thought of doing a fanzine. I asked my two best friends Joe and Andy, the only indiepop-listening people I knew at that time, to join me, and they agreed. In early December 1988 we released the first issue of our fanzine, Anorak - Can I Just Say Sweatshirt. A second (March 1989) and third (December 1989) followed. All were written in German and we did only 300 copies each. I released a book compiling the three issues later. Through letters by readers I got in contact with other indiepopkids, mainly in Germany. I also made my first contacts with labels and bands in the UK. Some readers told me hat they couldn't get the records we reviewed in our fanzine. At that time we bought most of them in shops in northern Germany.

The success of Sarah Records in 88 and 89 influenced a lot of people to start their own little label, and at the beginning of 1990 there was a growing scene in England with lots of new releases which were only available through mail from the labels. It was a lot of work to order from many different places; paying small amounts was not too easy as well. I got hold of the very first list of our friend Steve Biscuit (another story) and decided to start my own mail-order service in January 1990. During a Kitchens of Distinction gig I got the idea to call it Mind The Gap, taken from the London Underground in the first place but also a phrase which I always thought about in other meanings too. 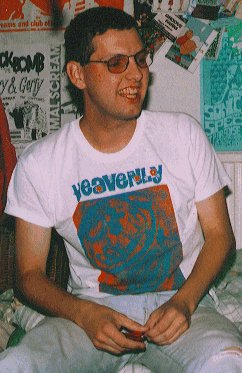 The first items I offered for sale were domestic releases by the Marsh Marigold label and the Haywains 7" on Blam-A-Bit. My first small official catalogue came out in April 1990 with steadily growing follow-ups every month. Most people ordered from Germany but I had a quite a few from European countries as well as the United States and Australia and other overseas countries. This was pretty much a non-profit venture, as the margins on 7" singles and self-made records are very small. What I got out of it was a free copy of the record I sold plus many contacts and friends. I wrote an eight page newsletter in summer 1990 and a full fanzine called I don't want to grow up in March 1992. The whole thing took a lot of my time and I cared more about it than about my studies at University.

In winter 92/93 I decided to finally finish University. But to get my Master of Science degree I had to complete my thesis which required a lot of work and time. I also planned a trip around the world after finishing uni, so I had to stop doing Mind The Gap. Fortunately I was able to find an successor in former Mind The Gap customer and personal friend Joerg Winzer who has run the mail-order section of Mind The Gap since March 1993.

Following the trend in the early nineties I put out a compilation tape simply called MIND THE GAP. During the whole of 1990 I tried to get songs for it, and released it on December 21st of 1990. In April 1991 John Peel played 5 songs on his BBC show and I got about 150 personal orders because of this. Until its deletion in summer 1992 I sold 870 copies world-wide. I did a reissue of the tape in spring 1994 with different insert and better sound quality. This is because many of the indiepopkids in the USA and Australia couldn't get the tape.

In October 1991 I stayed with my Australian friend Dave Harris in London. We both had thoughts about releasing a single as we both had done compilation tapes before. So we decided to do a 7" together. First naturally we planned to get two bands each from our native countries Australia and Germany. Dave thought about his friends The Sugargliders and Even As We Speak, I considered two Marsh Marigold bands. At that time I exchanged letters with Annemari of the Field Mice; she got my compilation tape and offered me a song of hers and Robert Field Mice's solo stuff for a second tape. I also got a great demo from a band in Sweden called Red Sleeping Beauty who had heard about my 7" project though our common friend Marcus Grimsby Fishmarket. So all of the sudden we had two great songs which we both liked a lot. We added The Sugargliders and The Legendary Bang and had a single line up with four bands from four countries which soon got the working title International Pop. We looked for a better name for some time but couldn't find one so the working title remained. The K-Label series International Pop Underground is very close which caused some confusion, but we thought the title suited the project too well, which is actually not the case for the K thing. We released the EP on 28th September 1992 and did 1500 copies.

1993-1994 'The Trip'
For six months I traveled through the United States, New Zealand and Australia. I visited and meet many fellow indiepop kids on the road and there is much to tell about this trip. Maybe some day I will find the time to write about it.
1994 - Going online
Even though I used e-mail, ftp and the usenet since the early nineties, when I returned from my post graduation trip, the Internet had changed. There was this software called Mosaic and it allowed you to view not only pure text on remote computers on the other side of the globe, but rich documents with images and even sounds and videos. It was also easy to create your own documents (pages) and make them available to the world (or at that time a very small percentage of people around the world). Access was limited to people with access to computers and network resources at universities or IT companies. In May 1994 I started a part time job developing traditional software applications, the remaining time I spend learning more about the thing they called "The world wide web", it was an exciting time. E-mail become more important as more and more people joined "the net". Up to that point I was using email locally at my university but didn't know any people abroad with access to email. For some years I have been on a German-wide phone-based mailbox network called MAUS, a bit like usenet with various discussion groups but there was only a single forum for pop music. On the net the 4AD mailing list was one of the few good places to talk about indie pop. alt.music.alternative on the usenet was sometimes alright but there were too many posts about too many bands I didn't care about. I remember learning about Kurt Cobain's dead on alt.music.alternative, the first time the internet beat traditional news media. The US based Indie-list was also interesting and didn't have the noise of the newsgroups and more intelligent writing, but again the bands people talked about weren't quite my cup of tea. The 'Mind The Gap' mail-order was gone and musically there weren't that many great things happening in 1994, Sarah and the small label UK scene were dying or already dead and the vibrant American scene I enjoyed the previous year was far away. Somehow I managed to stay unaffected by Britpop that was happening in the UK and actually from anything 'big' that happened in Britain since. I put a bunch of web pages together in June and in August 1994 I went to the PopKomm, a big music industry trade fair in Cologne. I had made some flyers for my new pop music web site outlining ideas for band pages, song downloads and discussion boards. The industry wasn't quite ready for it. I spoke with some people from Sony who were presenting their new phone based online mailbox with some basic text information about Sony acts. There were really impressed with my site. In September the indie pop list started and needed an associated web site. Steve Thornton in Seattle, Robin Humble in Melbourne and I volunteered to build the site and Robin came up with the name TweeNet. We went online a few weeks later. The backbone of TweeNet in its first year was my record database I had on my Atari ST computer. I had lots of information in there and just wrote some software to generation all the band and label pages for TweeNet. I had found my new role in the indie-pop community. Read more about the history of TweeNet and have a look at some of the early pages.
1995-1998 - The Popfest years
The indiepop list grew and grew in size and in spring of 1995 we decided to meet up in the real world. In May 1995 we had our first meeting in New York City, which we called TweeFest. We had the pre-fest party, the picnic, the record shopping afternoon and of course the gigs at night. All these things become stable parts of future Twee- or popfests as we called them since January 1997. Read more about these festivals in the Popfest section.
1999-2005 - London
In late 1998 I decided to finally leave Bremen and in April 1999 I moved to London and started working in Camden Town. The following six years were great, I made many new friends and rediscovered old ones. I saw many bands and bought lots of records.
Aug 2005 to Aug 2007- trip around the world
I needed a break from London and my job and planned to travel for six months but only came back after over two years. Read more about this trip
Present - Europe / Asia
Travelling again, you can follow me
Contact Us | Introduction | FAQ | User Guide | Privacy Statement | Terms Of Use | Updated Pages | Feeds
Last updated: 19-Apr-2008 © 1994-2021 TweeNet