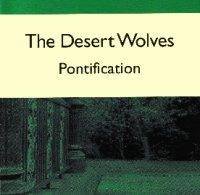 see the TweeNet page for more info on The Desert Wolves. A vinyl version of this album will be available through Vinyl Japan later this summer.

The physical CD is sold out but you can download the music from our online shop at twee.net/shop/

Who are the Desert Wolves? That is what a lot of people have asked us lately. We can explain it very simple: The Desert Wolves were one of the best groups from Manchester in the late 80ies. You might argue now: "And the why haven't i heard of them until today?" And we will reply: Quite easy. In 1987/88 the band put out two great singles on the Ugly Man label, where Black released his first single, Man From Delmonte one 7" and two 12"s (now rereleased on Vinyl Japan) and Too Much Texas, while being fronted by Tom Hingley, later singer of The Inspiral Carpets, had a great 12".

But as the story goes, small indie labels didn't and still don't have a huge amount of money in their hands and distribution companies not always know exactly how to handle the records they distribute, so the Ugly Man records didn't get the recognition they should have deserved in their time (except the one for Black).

The Desert Wolves play melodic guitar pop. As the critic said that there are a lot of indie bands producing music like this, but few reach the purity of sound the Wolves have evolves, or the clarity of emotion, you can find in the songs. Just listen to the song "Mexico". As one of our all-time favourites ever this song reflects perfectly what this band stands for: Chiming guitars, melodic trumpets, a thumbing rhythm section and a voice, so lovely, so sweet, so heartfelt and as soft as peanut butter. "We could go driving/down Mexico way/The wind in your hair/You look lovely beside me" Surely, nothing is as perfect as you want it to be and "the line between friendship and what could have been in thin" but how would life be like if there wouldn't be any struggle left?

But let us begin with the begin. "Gunmental Jaguar" is one of the unreleased gems from this album. Although Manchester is not Liverpool, in this song you find musical references to the other huge music metropol in the north of England. Here i would mention Ian Broudie (now mastermind of The Lightning Seeds) and the bands he produced in the 80ties: Wild Swans, Care or even Echo & The Bunnymen. And traces of another group can hear in here: The La's, a band who never rised above cult status but later turned into Cast (well two of them actuelly) who had some reasonable success.

You go on listening to this album and you will feel the freshness and the youth in every song. But even when you are young you are "Yearning for all that yesterdays" (from "Stopped in my tracks" which was produced by now famous radio DJ Mark Radcliffe). When something ends another thing will start but will it be as good as before ? "I catch the falling rhythm of the soft summer rain/sad again" (Desolation Sunday Morning"). And isn't the trumpet a gift of heaven? Then you have "Passions in the afternoon": "He made her love/he made her cry/ he gave her everything" but "now he is alone/walking the streets/loving her forever". Hear Martin's great voice on this one singing a great falsetto after the fantastic guitar solo: "She said goodbye-hi, goodbye, goodbye-hi". Isn't it sad ? In 2 1/2 minutes you can say a lot of things. "How happy i would be/If only you would speak to me, Rochelle" ("Speak to me Rochelle"). Just listen to the begining of this song: You hear the half- acoustic guitar, a bit distorted, then some smooth piano chords come along the way and the song starts. Please i have just one wish: Speak to me, Rochelle - you would save my life ! After aforementioned "Mexico" we will come near the end. Two steps before it there is "Besotted". How it starts, do i have to say more ? Anyone who has ever fallen in love with chiming, brilliant plink-plonk guitars will immidiatly feel a warmth around his/her heart. There it is, the perfect sound of a guitar, promesing the fullfilment of all your dreams and more. "I don't really care if i never see you again/ just as long as i see you tomorrow". Live for the moment, it's the only time you'll have for sure! "November" is far away and it was recorded in the same session as "Besotted". You can hear it in the guitars. Until today this song has been a lost masterpiece. It is short and terse. In a around two and a half minutes a fantastic melody is developed from nothing to something beautiful like a spring lawn in the early morning aftzer a humid night. "Just close your eyes - be near to me" - this is what we dream of in cold, frosty November nights. "There's a wonder in the sky..."

On this compilation you will find two unreleased tracks ("November" & "The Gunmetal Jaguar", one song ("Passion in the afternoon") that was previously released on a football compilation from the follow-up label to Ugly Man and six songs from their two 12"s on Ugly Man leaving out one song from the second single, a short accoustic version of "Speak to me, Rochelle" named "Le Petite Rochelle".

Nowadays Martin King and David Platten play in the The Vermont Sugar House. This band has released one 7" on Firestation Tower Records at the beginning of 2000 (which might see the daylight in the UK through the re-started Ugly Man label) and are planing to release another 7" later this year. If everything is goin its way there might follow a full lenght album in the year 2000.